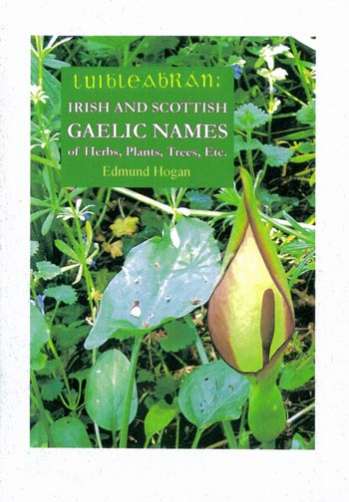 Edmund Hogan was one of a few diligent scholars of Gaelic and historical references. He was professor of Irish Language and History at the University College of Dublin, and Todd Professor of Celtic at the Royal Irish Academy.
His list comprises a section on Gaelic plant names and also one with English-Gaelic names.

His list contains 21 reliable sources, beginning with the 'St Gall Glosses' from the eighth century.

It spans the work of Dr. Caleb Threlkald of Cumberland, John K'Eogh, Chaplain to Lord Kingston, Dr. Wade of Dublin, Eugene O'Curry with his list of circa 1335 Irish herbs in Gaelic and English, John Cameron of Sunderland, Lord Walter Fitzgerald, Dr.P.W. Joyce, Dr. Whitley Stokes, and finally, Peter O'Neachtain's "List of Irish, Latin and English Names of Plants",in an Irish manuscript marked 20 of the King's Inn Library, written circa 1732.

Thus the old names of plants and trees have been preserved by a handful of scholars, especially during the 18th and 19th centuries, so that we in the 21st century can study and pass on knowledge to another generation.