The Colloquey Of The Elders From The Sylva Gadelica Of Stand 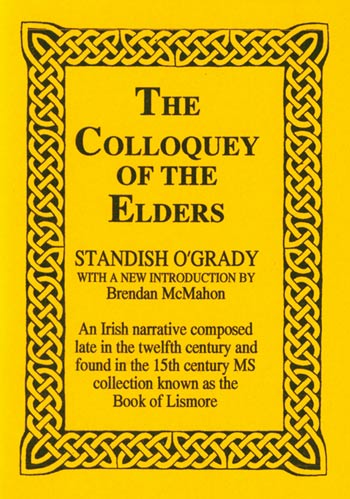 An Irish narrative composed late in the twelfth century and found in the 15th century MS collection known as the Book Of Lismore. With a new introduction by Brendan McMahon.
Also known as the "Colloquy with the Ancients", the text in this book is taken from a larger work by Standish O'Grady called the "Sylva Gadelica. It is reproduced in sub-facsimile from the London edition of 1892. The text belongs to the Fenian cycle, dealing with the legendary adventures of Fionn mac Cumhaill and his war band, the Fianna. Almost certainly a mythical figure, Fionn himself is the archetypical hero of Irish romance, a warrior, a hunter, a seer, generous, brave and irresistible in battle. Though Fionn is dead long before the colloquey begins, he is its real hero. Two survivors of the Fianna, Oisin and Cailte are wandering through the wild places. Oisin leaves to visit his mother, who is one of the side or fairy people, and Cailte continues alone. After crossing the Boyne he meets St. Patrick, known as "the Adzhead" at Druim Dearg, and engages in a dialogue or colloquey, concerning Oisin's father, Fionn mac Cumhaill, and life in pre-Christian Ireland. Though occasionally critical of pagan belief, Patrick is generally tolerant of, and interested in Fenian narrative; he is to be heard adjuring his scribe Brogan to write them down, and he often compliments the narrator.