The Romance & Prophecies of Thomas Erceldoune. 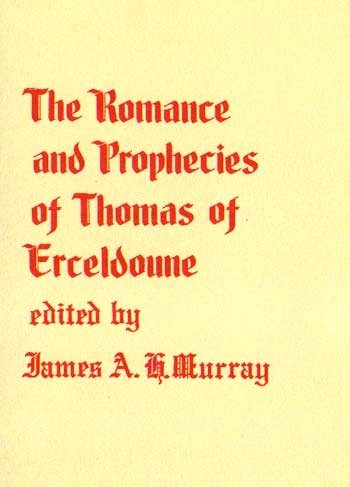 James Murray's book includes the complete text of the fif teeth century "Romance and Prophecies of Thomas of Erceldoune," with lenghthy illustrations from the prophetic literature of that and the following century. It also includes an introduction containing a summary of "all that history, legend, and tradition tell us of Thomas and his alleged sayings." The subject had previously been taken up by Sir Walter Scott in the Minstrelsey of the Scottish Borders, and Murray's book owes much to the interest generated by Scotland's famous author. The present book is a facsimile of the edition of MDCCCLXXV, published by Trubner & Co., London, for the Early English Text Society.