Traditions and Hearthside Stories of West Cornwall - 3 of 3 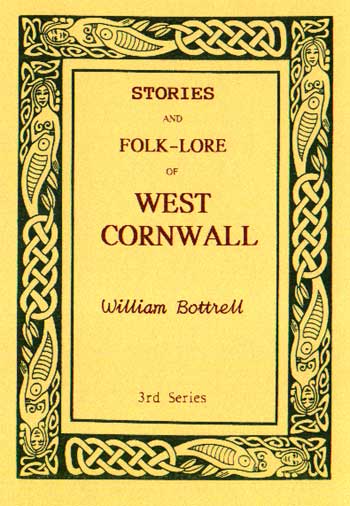 Third Series ( Stories and Folklore ) William Bottrell collected his material on the legends folktales and folklore of West Cornwall during the second half of the nineteenth century, long before radio and television, at a time when the art of story telling was very much alive. As one might expect, there are many tales of encounters with the "little people" reminding us of the Celtic roots of the Cornish tradition. Other tales tell of witches, changlings, and a magician-alchemist, and there are ancient mariners' tales of mermaids, pirates, and ghost ships. Bottrells' collection was published in three series, the first and second of which were entitled Traditions and Hearth-side Stories, and the third of which was simply called Stories and Folk-lore of West Cornwall. The three series are now reproduced in facsimile, in three paperbacks, and sold separately.

Other books by W Bottrell