The Saga Of Hacon 2 Volumes 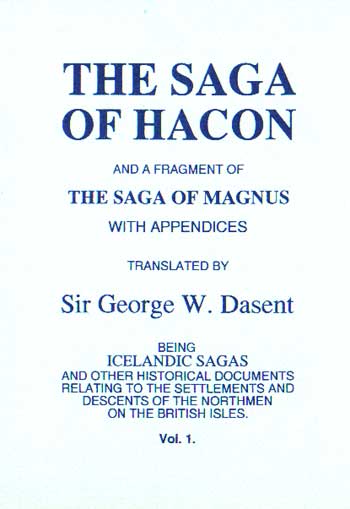 A facsimile reprint of the edition of the original 'Rolls Series' translation by Sir George W. Dasent. The Saga of Hacon presents the reader with an unbroken record of the career of a king who ruled in Norway from 1217 to 1263 during a period when the predatory instincts of the Northmen, satisfied to some extent by permanent settlements and acquisitions in France, the Mediterranean coasts, England, Scotland, and Ireland, had been abandoned now that the consolidated strength of European monarchies rendered a repetition of the piratical invasions of earlier times impossible or unprofitable, whilst the warlike elements of each Northern country were fully occupied by the internal dissensions which show that foreign agression had not been given up in consequence of of any decline in the love of fighting for fighting's sake. As is usual in such records, it is the fighting which principally interests the chronicler, and it is only by reading between the lines that we are able to catch a glimpse of of such important matters as the state of trade during the period, and of social conditions. The connection of this Saga with British history is mainly due to the expedition of its hero to Scotland in 1263.
Being Icelandic Sagas and other historical documents relating to the settlements and descents of the Northmen on the British Isles