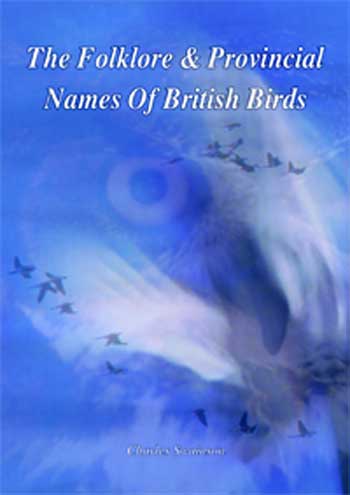 Charles Swainson's book is an invaluable reference work for ornithologists and students of folklore alike, for it brings together in a single compact volume information which is otherwise scattered across the literature of Britain, Europe and the Middle East, much of it long out of print or found only in the great reference libraries, where we can be directed via his extensive bibliography spanning the seventeenth, eighteenth, and nineteenth centuries.

The birds appear species by species. Names are given in Latin, common English, and regionally, and generally with derivations. (Frequently also given in Gaelic, French, German and Norwegian). Alongside this there are rare and fascinating snippets of folklore and also more detailed extracts from the folk and other literature of Britain, North Western Europe and even as far and diverse as the Apocryphal gospels and occasional Arabic sources. For an example closer to home, he illustrates the various practices used in differing locations, to dispel the ill luck caused by the appearance of a single magpie, from making a cross in the air, removing your hat and making a polite bow, crossing the feet, hoping for sight of a crow, or spitting over your right shoulder whilst thrice repeating a certain given rhyme.

To fully appreciate the value of this work it should be kept in mind that this was written at a time when the author had plentiful access to living folklore which has subsequently been lost or long forgotten.

First published in 1886 by Eliot Stock, this present work is a facsimile reprint of that edition.